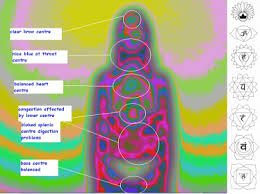 Biofield Viewer™ system is founded by Dr. Thornton Streeter (Link) (U.K.) and is developed by John Catchpole (Link) (U.K.) The Biofield Viewer™ software combined with the controlled imaging environment allows for visualization of the light photon interactions between the light source and the human biofield. The Biofield Viewer™ program has to compare the reflected rays with the incident rays and then re-codes them and produces a biofield image. The system identifies the intensity of light within the image and then gives the photons a designated number relating to a color in the visible spectrum. Thus it is a digital encoding system and the smallest differences in density of photons is recorded and viewed on a computer screen using color coding. Light striking the physical body may be reflected or absorbed. The various intensities of light differ on and around the body and Biofield Viewer™ allows these differences to be seen.

This visual, non-invasive scanning system will reveal where current problems may exist and where developing issues might arise. Using a real time moving image of the body’s energy field (or aura) the operator can diagnose and monitor problems associated with your bio energy field. If addressed early enough, this may prevent disease or infection manifesting itself in the physical body. It can show past, present and future conditions and imbalances in the energy field.

Color is vital as it shows ‘life-force.’ An abundance of one single color suggests ‘overcompensating frequencies’ that are required, and a ‘color absence’ indicates a lack of life. General brightness can indicate that the subject is in a state of good energetic and physical health that they have no need to ‘suck’ energy (including light) from the surrounding environment and thus under the controlled lighting conditions appear to be brighter as they are absorbing less.
The table below represents the colors and their varying wavelengths and speed which are used to represent the lower to higher gradations of lights. Thus, low intensities are represented by the slowest wavelength which is red and higher intensities are represented by the fastest wavelength which is violet. 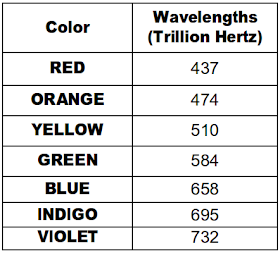